Helping out with my sisters wedding

Like I said before, I was the maid of honor for my sisters wedding a few weeks ago.  So, naturally there were a few crafty things that I did for her.  She called me in a panic one day after meeting with the people who were doing her flowers because she had just realized that she did not have a flower girl basket.  She asked if I could make one for her. 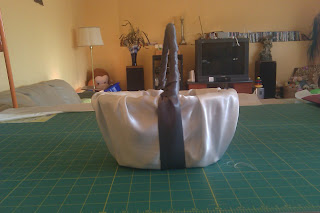 I used a basket I found in the clearance section at joanns and some ivory satin that I had as well as some ribbon that matched the bridesmaids dresses.
My other sister and I were in charge of her bridal shower.  The bride does not like decorations so decorating for the shower was a bit of a challenge.  She was okay with having a banner of some sort but after looking for days I could not find any bridal shower banners that were appropriate for her.  I decided to make her a banner that she could still keep after the shower was over. 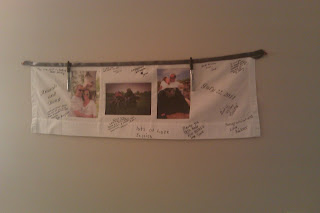 I put a few of their engagement pictures on a piece of fabric using iron on t-shirt transfer paper and I added a ribbon so it could be hung up.  The piece of fabric came from some curtains from my sisters bathroom that she had me shorten a few months ago.  We used the banner as a guest list for the shower. 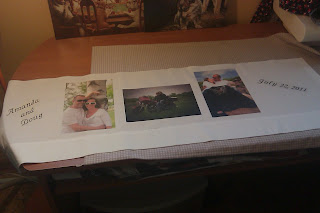 a closer up picture of the banner before the ribbon was attached.
Posted by Amber at 11:12 AM

Amber
I am a full time student with an amazing husband and two rambunctious kids. I also love to sew!